What a great morning I had out working dogs. I have decided a big part of how any training/working session goes depends on my attitude. I was fired up and excited that Dustin was going to go set some sheep for me to work on a few double lifts with Jag and Zac. We set up a couple of fairly big ones. They could see them when they turned around but only for the first 50 yds or so and then not again for quite awhile.
Neither got out without a little help but actually I have to say that I'm really happy that they both let me help them so well. Zac has a tendency to just stop if he can't find them in the first minute or two. Because of where I ended up turning him back he couldn't see them at all for the first 200 yds or so but he let me guide him out well. 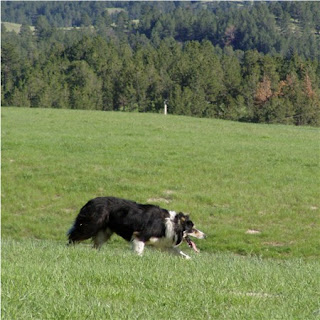 (Zac)
Jag on the other hand will always (well so far anyway) just take off running and just keep looking until he finds them. This time I asked him to stop and really look for a second and then take off. He was right on then. I did some international shedding with him after that and even Dustin commented on how nice of a job he did. You would know how big of a deal thiss if you knew how little Dustin actually watches me work my dogs! :-) 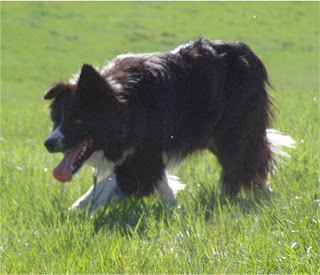 (Jag)
Dustin seemed to have a really good time working Kat as well. He worked on quite a bit of driving with her and his timing has improved so much! I wish there were more trials around here that he could run in before he moves up to Open. 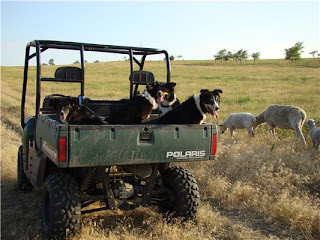 (Nell, Jag, Kat and Zac waiting while Uno is bringing the bunch behind me)

I entered Uno in the finals but in all honesty have had my doubts on whether or not she'll really be ready to be competitive. I think the world of this little dog but she is a speed demon and has been really hard to hold on a drive. I have really been working on what Patrick told me with her and it's been paying off. She was AWESOME this morning!!! I was so happy with her. Now, I still don't know if she'll really be competitive at the final's or not but I'm starting to get a bit excited to find out. 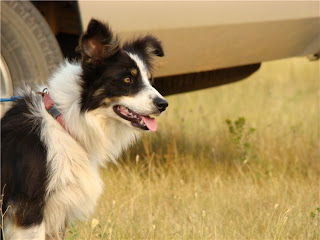 I'm hoping to find time later this evening to work Cash and Tess as well. They're both at such fun stages right now as well. I'll try to write more about them another time.
Posted by Laura Hicks at 9:51 AM 2 comments:

So I figured I needed one more thing to do in my days so I've started training for a 5K race. I figured I always take the dogs out for a good walk in the morning anyway so I might as well try to start kicking it up a notch. The dogs love it! Okay, they love the run/walks, I'm not so sure how they all feel about my "off days" though.

I have a hybrid bike that I take out across the pasture's with them the 3 days a week I don't run. It is pretty funny to me on how some of my dogs have figured this biking thing out. They don't have any trouble keeping up with me (or running out and back to me either) when I'm "running" as I'm not setting any world speed records. The bike is a little harder to stay out in front of though. Zac, Jag, Cash and Kat each have a certain distance they all go now and then just hang out there and wait for me to get back. Darn bums! Tess and Uno are my die hards. I haven't found a distance they won't go yet. Nell does her best to keep up but I usually end up meeting her coming on my way back. I don't take the two pups (Rock and Fly) on bike rides as I think it's to much for them at this age. They do enjoy the run days though.

Either way I figure we're all getting in a little better shape and I know for sure my stress level seems to have gone down since I've started making the time for this every day!
Posted by Laura Hicks at 9:35 AM 3 comments: