We're hosting another sheepdog trial on July 16th and 17th at the ranch here in Allen, SD. Dan Keeton has agreed to judge for us and we're excited to have him. We'll be running on ewes with May lambs. We have done this before and it has proved to be challenging.

If you'd like more information about it or an entry form you can go to www.lmstockdogs.com .
Posted by Laura Hicks at 10:10 AM No comments:

Oh spring, come out, come out wherever you are!

Well, since winter won't let go of it's grip on us I figured I might as well get even more snowy pictures. We have all decided 3 blizzards in 3 weeks has passed the level of discomfort for all of us. Calving during all of this has made it even more disheartening. We figure spring (or summer eventually) has to come so we just keeping praying for warmer weather. 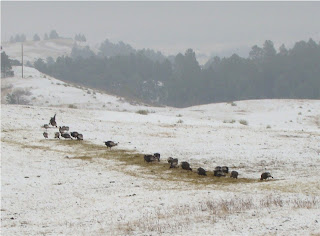 The picture above was taken by my youngest son, Brady, earlier today. He and his brother Dustin cake the steers every morning before they start school. The wild turkey have figured out that there are good leftovers for them in and around where the calves eat. The boys both really like wild life and the turkeys are really strutting about right now. 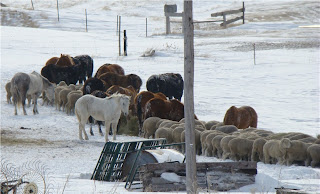 This picture was taken the day after our 3rd blizzard. We had brought the sheep closer to the house before it hit. Trying to get them back out to their pasture took several days as the snow had blocked all of the gates other than on to the main gravel road. 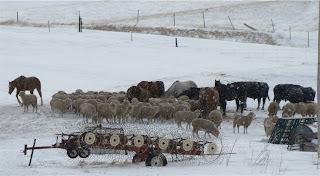 It's hard to tell in this picture (taken the same day as the one above) but we got a foot and a half of snow out this storm. The previous 14 inches had melted quite a bit so there is a LOT of water under all that snow. 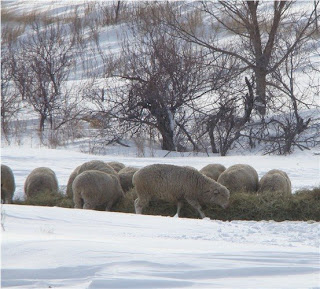 Here are the ewes enjoying some hay that had just come out of the processor. There starting to bag up quite a bit. We were supposed to shear next Tuesday but there is no way we'll be able to get them through the corral and to the barn by then. So we've moved it back a week. We had one ewe lamb in a snow storm last night and now we're just hoping the rest will hold off a little while longer. The new lamb is doing great! Tough little buggers. 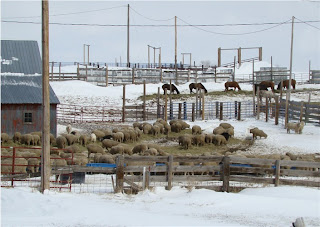 This picture was actually taken right before the second blizzard. We got about 10 inches or so out of the first and that's what is still in this picture. 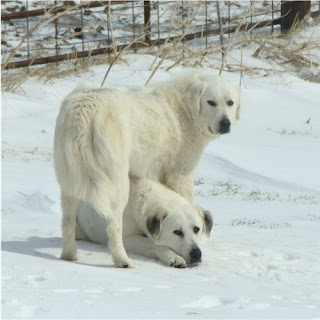 Here are my guard dogs looking like they're really ready for spring as well! Nala (standing) is an Akbash from Julie Hansmire of CO and is about 2 years old. She is absolutely fantastic! Simba (laying down) comes from Ellen Beach of MT and is an Akbash/Pyr. Simba is about 5 years old. He's the fiercer of the two with predators but the more easily caught as well. It's been a long winter for my boy! Nala is helping out by giving him some love.

Posted by Laura Hicks at 5:21 PM No comments: