Okay, I'm sitting here at the computer feeling a bit sorry for myself but also very fortunate at the same time. A weird place to be in I'll admit. Hearing about all the dog trials going on right now that I'm missing because of family and ranch obligations is tough. Of course there's a part of me that wishes I could be there having a go at it with my own dogs. The other part of me doesn't want to miss a day with my family right now.

Dustin and Brady are both back in school and playing football. Well, Dustin is playing and Brady is conditioning with the Junior High team hoping that he'll get his cast reduced to below the elbow before the first game. He can't play or hit until that happens. He goes back in for another checkup on the 10th and his first game is the 16th. Talk about cutting it close. :-)

The football season is making the fall trial's a bit hard to get to right now. Between not wanting to miss any of their games I'm also spending a big portion of my day herding my sheep around. It's that time of year again when they're on the hunt for anything green and fences are merely an obstacle to be conquered. Thankfully it's been cool this past week so it's not effecting my dogs at least. 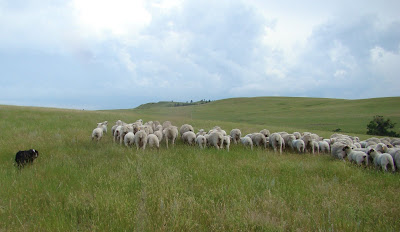 (Nell moving the escapees back)
We're planning on selling lambs on the 16th of this month. I hope I can make it that long as I'm ready to bean them most days. Not to mention how great the market is right now. I keep praying that I'm making the right decision to wait for the big sale on that day and not go this week. Below is a picture of the lambs from their best angle taken over a month ago. 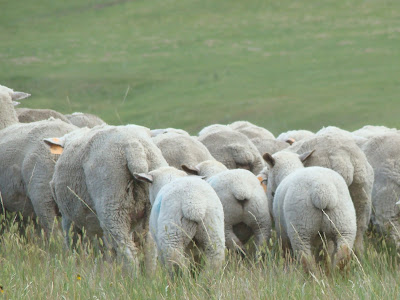 I'm sure enjoying my dogs right now. I sold Cash back in June and it's been a tough adjustment for me to not have him here. He was so darn easy to get along with but he's doing great in his new home and even running well at the trials for his new owner already. Not having him has helped me step up my game with Rock and Bet though. They are both nice young dogs and need the extra work at this point in their lives. Jag is still the main man when it comes to the big jobs but both Rock and Bet are stepping up quickly.

I've taken over Dustin's young dog, Speck, as his schedule isn't allowing enough time to get him trained right now. What a super talented young dog! I wish we hadn't had so much time off with his injury but even if he doesn't make a nursery dog now I'm still excited about his future. My biggest concern with him is if he'll stay sound with our dog's working lifestyles.

I also have another young female who will be a year on September 17th. Jess is a full sister to Rock (Reece and Jag) but one litter younger. She is SO much fun to work. Full of intensity like her brother but with a bit more style. She might not be quite as full throttle as him but I could use a little of that right now! :-) 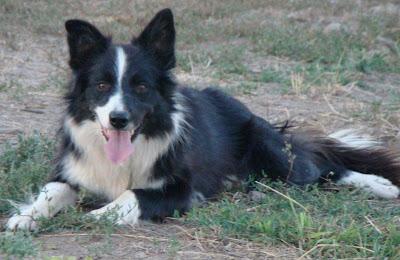 (Jess at 11 months)
So I really don't have any excuse to be feeling sorry for myself for missing a few dog trials. I'm really fortunate to have two boys who are so darn enjoyable to be around (despite being teenagers - just kidding all you teens out there), a hubby who supports my decisions even when I don't know what they are all the time, a ranch that is productive and enjoyable, as well as a kennel of dogs that I'm so pleased with right now. I guess in the grand scheme of things, I've got it pretty good!
Posted by Laura Hicks at 8:45 AM 2 comments:

Jamie and Lee Spring had us all up to their place on August 26th and 27th. They have such a beautiful place and as our judge Dianne Deal said it makes you want to go buy a gingam dress and play "Little House on the Prairie". I'm not sure how well that dress would serve a person while staring down the range ewes Jamie brings in for the trial though. They were yearling rambioullet ewes and were tough as they hadn't been worked by a dog much prior to this. They tested the dogs and it took a lot of work the first day to get them lifted off the top. This was definetly a DOG trial.

The course is on a hay field that runs uphill so it's a perfect shape for a trial field. It was a 12 minute course for the Open and it still ended up being a very long day the first day. We all went to the house for supper that night. It was great to relax and visit awhile after being out in the heat all day.

The second day the sheep got a little more manageable as they were figuring out the "rules" a little more. There were more scores the second day and we also got done earlier. This was a relief as we needed to travel the 2 1/2 hours SE to get to my place.

We ran at Mike and I's place on Saturday and Sunday (the 28th and 29th). The temps didn't cooperate anymore for here than they did up north. I'll admit it started getting to me a bit on Saturday afternoon but managed to rally up enough energy to finish on Sunday without being to big of a crab. Hopefully anyway. :-)

We ran on 2 ewes and 3 lambs for our trial. They'd been running in that pasture for a couple of weeks prior to the trial and knew where they were. It helps from a sheep production stand point because if there is a wreck and one gets singled off, they already know where they are so it's easier to get them back to the bunch. On the other hand, it makes them tough as they like to split and try to "divide and conquer".

The dog's adapted well though and most handled the sheep really well and there were quite a few good scores both days. The outrun was about 700 yds and the sheep had to cross two draws on the fetch. It really didn't seem to give anyone to much trouble and it was fun to watch the dogs handle the pressure coming out of the draws.

Both Jamie and I couldn't do these trials without the great support of our families as well as all the help from those running in the trial. We were both running around like chickens with our heads cut off most of the time so very few pictures got taken. Hopefully we can scare up a few though and share them with you soon!
Posted by Laura Hicks at 7:42 AM No comments: