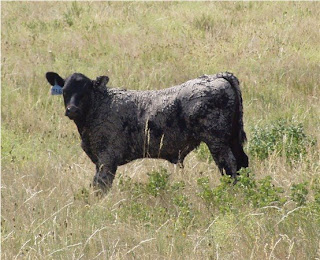 (I think he found a little mud!)

We've been pretty busy with fall cattle work lately. Helping neighbor's ship yearlings, preg checking cows and weaning calves. I really think fall and spring have to be my favorite times of year simply because of the loads of riding and helping neighbor's work cattle. It's a big part of what our area still takes great pride in, helping your neighbor's. It doesn't hurt that being horseback with a good dog and working cattle is right up there with heaven on earth for me!

I've been riding a young horse since last spring. We're still figuring each other out but I really like him. He's a typical young horse without a lot of miles under his saddle yet though. Every time I ride him he learns something new and advances in my opinion. Today was the first day though where I really felt like he went from a "young horse" to "I've got a horse now". He's always handled cattle work okay but the way he stepped up in every situation today was just great!
We gathered the cows and calves into a portable panel corral in the pasture. They were gathered about a month ago to precondition the calves and then again to preg check recently. They came to the corrals out in the pasture great. They sorted just fine. We left the calves in the corral and started to move the cows back to the house. This is never an easy job and it was pretty tricky for the first 5 minutes with cows breaking back to their calves like crazy.

We had Jag with us as he handles all the different rider's there whooping and hollering without letting it effect him at all. Zac had been officially retired from this type of work as well. When the cows started cutting back he was stopping them and riders would bring them back. One cow got back and got on the fight though. She tried her best to just rub him into the ground. He kept stopping her but she finally got him down pretty good. He never quit trying though. I was up there trying to help him at that point. The cow tried pushing over my horse. He laid his shoulder into her head and kept pushing. That must have done the trick as she just completely gave up and marched to the house like an old milk cow.

So the cows are all in the corral now and the bawling is already starting to quiet down a bit. Jag is a bit sore from the one cow rubbing him into the ground. Amigo, my horse, is back out to pasture grazing and enjoying the sunshine. The boys have still managed to get all their schoolwork done despite having to ride all morning. I'd say it was a GREAT day. 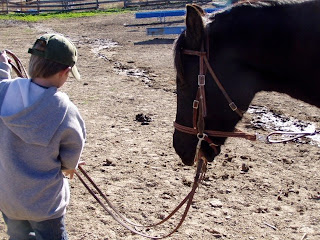 (Brady and his horse Spades)

Posted by Laura Hicks at 1:23 PM No comments:

I've been meaning to post a write up about a goat trial we went to at the end of September for awhile now. I may get it done today!

The Griffith Ranch down in Nebraska hosted a field trial that was points and time working Boer/Spanish cross goats. JoEllen and John Wiese manage the goats for Griffith's and put together the trial. They're such great people and bend over backwards to make this an outstanding event.

I love doing things out of the norm with my dogs to see how we do and what we need to work on. This was a perfect opporunity and fun to boot! It was two days and the first day the goats were about like what I imagine antelope are like to work. Wild as the wind! The fetch was only about 200 yds but keeping them all on the field at any distance was a huge challenge! The goal was to get all 5 goats brought through the fetch panels, around you for a left hand drive and then once they cleared the drive panels you were free to help at the rest of the obstacles.

Well, these goats aren't to sure about people as they run in a group of about 1200 out in cedar filled draws all their life. So I'm not sure how much help the "people" were at most of the obstacles. We had a maltese cross, then a pen where you were supposed to have your dog hold them in the open pen while you went around the other side to let them out. Ha! That wasn't happening. Then on to a horse trailer where the goal was to load them, have the dog hold them in the trailer while you went around to open the side door to let them out. Again, that wasn't happening the first day. Then on to a Y chute which wasn't that difficult and a finish with a shed. If you could get that far (no one did that day) the goats were pretty darn easy to get apart. Holding them together had been the challenge! BTW, the second day the goats changed dramatically and they were all fresh again. Not sure what changed in them but the difference was HUGE!

Zac was 3rd the first day and Uno won the PN both days. (WTG Uno!) The first day Jag did setout to get us started for about 2 straight hours in the heat on goats that were hell to hold. I didn't have a dog left when it came time to run. I ended up retiring him that day. The second day we had a dream run going and had it won going into the shedding ring. One nanny tried to jump over Jag and that was all she wrote. Big fat DQ!

I also decided to give Cash a go since I figured it was a smaller course. So, I ran him in nursery. The first day he started to come in tight on his outrun but took his blowout really well. He handled the goats well but was getting in over his head before it was over so I retired. The second day was much better. He worked so well. We didn't place but I think I was more happy about his run that day than anyone of my other dogs! He handles stock so well and trys SO hard to please me. A great combination. I can't wait to see how he handles this next season. I really need to put the finer mechanics on him now. :-)

Thanks again to JoEllen, John, their whole family and the Griffith's for giving us handlers such a great opportunity!
Posted by Laura Hicks at 7:52 AM No comments: 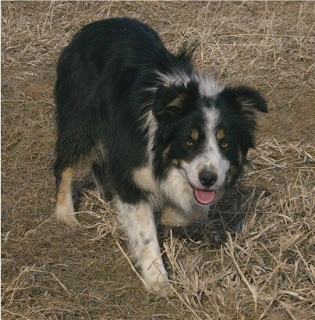 Well, Uno has been sold and leaves tomorrow. She'll be going south and will get out of our cold winters. Lucky girl! She's going to a super home and will hopefully be hitting the trial scene with them soon. I'm going to miss her terribly though. She's always been a one person dog and enjoys being with me. Not to mention how much I respect this little dog's work ethic and drive. She would rather die than quit. My youngest son always says, "Dynamite comes in small packages" and I tell you that fits Uno to a T.

Fall is a busy time at my house. There are lambs to sort and sell. Yearling steers and spade heifers to gather and ship to the feedlots. Calves to precondition (vaccinate) and cows to preg check. The cattle work goes on all over the county at our neighbors as well. Ranching communities such as ours still trade help for cattle work. So we go help them work their cows and they come help us. The spring cattle work is very similiar as well. I wouldn't trade it for anything!

One thing that we don't trade help on is anything to do with the sheep. Mainly because there isn't anyone else within a 100 mile radius that owns sheep besides us. Also, we can get everything done we need to do with the dogs.

We just shipped lambs out last week. I used several different dogs. We gathered them and counted the ewes out of the pasture to make sure we had everything. Uno and Cash did the bulk of that work as their young and need as much experience as they can get now. Once we got to the corrals the older dogs got me started as the young dog's rested. We hold the big bunch in a pen and then sort off 10 or so at a time with the dogs to put in a tub to run up the sorting alley. The dogs just love this work!

This was Cash's first time helping load the tub and alley. Wow, did he excel at it. He's a very level headed young dog with enough power and presence to move anything. I think I'm going to really enjoy him.

Uno loves this work as well but gets a bit more wound up. She thinks heeling sheep in tight quarters is what life is all about. She settled in after a bit though. I have to say that I have worked this dog pretty darn hard at times and have yet to find the limit of her stamina. She is such a great work dog!

Okay, I'll try to keep up with more of what's going on around here now.
Posted by Laura Hicks at 4:07 PM 2 comments: