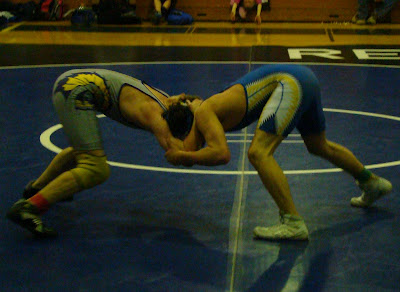 So, I usually video all of Brady's wrestling matches so he can watch them later to see what he's done and learn from it. I snapped a few pics at the beginning of a match the other day. He is in the silver singlet with the Warrior head on the side. 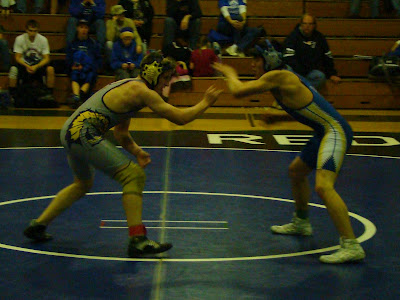 Cold and icey here today! Haven't had much for winter though so can't complain. Mike is already talking to people about haying for them this summer and getting haying equipment tuned up and ready to go. Yikes! I'm not ready for that again.
Posted by Laura Hicks at 10:08 AM No comments:

I am still alive!

I can't believe how long since it's been since I posted on here! Sorry. I think Facebook has ruined me for blogging. I'm going to try to post more often again but won't make any promises.

Since the last post was so many moons ago I won't try to catch you up on everything. We spent all summer haying. And I do mean ALL! Little time for anything else honestly. The boys were busy with football this last fall but we managed to host our trial the first week of Oct still. Same time as homecoming. Sure made for some tired teens!

We took a short family vacation the first weekend of December and went out to the NFR in Vegas. I can't say I enjoyed being in Vegas very much but loved the NFR itself as well as spending time with my family.

In late October we lost Jag to an extremely fast growing tumor. It still hurts to say it and I miss him every day but thankful to have several of his offspring that I enjoy working and living with so much.

Winter has been really mild and open this year. I hope we get moisture early in the spring so we still have plenty of hay to put up again though.

Just got done with the Denver and Black Hills Stock Show's. We had a bunch of fun and our dogs did well so sure can't complain. Dustin has stepped up SO much as a handler and I'm more nervous and excited watching him than running my own dogs! Kat is getting close to retirement but he's got a young daughter of hers that is looking good.

Speaking of Dustin he's a Junior this year and Brady is a Freshmen. Where or where has the time gone!! Dustin is looking at going into some type of mechanical field. He loves working on tractors!

Well, I'm sure that's scattered enough for one post. I'll try to do shorter one's more often so we all don't get bored with them!
Posted by Laura Hicks at 3:32 PM 2 comments: