I'm sure a lot of you know already but Dustin won the BHSS sheepdog trial!  If you were there you know how exciting it was.  If not, let me tell you, it was awesome!!  He and Kat worked so well as a team.  Dustin read his stock well and let Kat do her thing.  They got faster and smoother every round.  He was 6th in the first round, 5th in the semi's and 1st in the finals!  There is a great write up about it on www.wyomingstockdog.com under "results".  Will try to get a few more pictures added soon as well.

Now for puppy update.  Jess had 7 puppies on February 10th.  6 females and 1 male.  There are even a couple of tri's in there.  Yay!  I can't help it, I love a dog with some tri.  I'm sure it's because of Zac.  She had them quick and fairly easy.  She's being a great mom as well.  Thinks she wants to go back to work already though. :-)  I'm putting pics up fairly regular on facebook.

Until next time, enjoy the warm days and keep praying for moisture!
Posted by Laura Hicks at 8:39 AM 1 comment:

To much to write about and to little time today so will just do a quick update and hopefully follow up later next week.

Jess is bred.  Yay!  We're expecting puppies in about a week and a half.  She's getting pretty roley poley.  We bred her to Jamie Spring's Cort.  It should be a really nice cross.  This is Jess' first litter so I'm excited and nervous at the same time.  I think the world of that little dog!

Tomorrow is the Black Hills Stock Show dog trial.  I look forward to it every year.  There's a lot of pressure with it being a big, local trial that so many people go to watch.  I'm trying to just enjoy working my dogs and let everything else take care of itself.

This will be Dustin and Kat's last time competing up there and I know what that feels like having retired Zac not to many years ago.  Your first dog retired is pretty tough.  I'm praying he just enjoys every minute with her out there and appreciates everything she gives him.

Wrestling season is in full swing and we have put many miles on going to tourney's every weekend.  I love it though!  I'm definetly a "cheerleader mom".  I LOVE watching my kids do their thing.

Will be back soon with a follow up from the stock show!  Until later, please pray for moisture!!!
Posted by Laura Hicks at 5:50 PM 2 comments: 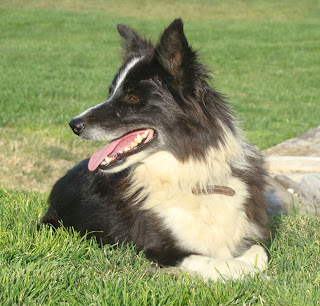 (Jess)
We haven't had a litter of pups in a couple of years and I'm pretty darned excited about possibly getting some.  I'm watching for Jess to come into heat like someone watches a pot to boil!  She turned 3 in September and I haven't enjoyed a female this much in a long time.  She hasn't been the easiest dog to trial yet as she likes thing to MOVE and if they aren't going fast enough she has been a little quick to encourage them along with a heel bite.  That doesn't fly with judges. :-)  In her defense, I haven't been trialing much and think she's run in about 5 trials in her life.
She's a daughter of Jag and Jamie Spring's Reece.  Same way bred as Rock and a lot of other really great dogs!  She has great qualities from both parents.  She has enough eye to make her really stylish.  She lives to work and work hard.  I haven't found a job that she doesn't meet head on yet.  She'll go all day and has great stamina.  Doesn't hurt that she's just FUN to be around and train.
We call her our pocket rocket.
We're going to breed her to Jamie's Cort.  They're very similiar in a lot of ways.  He's a little more patient with his heel bite though! ;-)  Cort likes to come forward and is level headed.  He's stylish and biddable as well.  I love how he is with Jamie's kids too!
She's due to come in any day so I'm going to go pray for puppies!
﻿
Posted by Laura Hicks at 2:53 PM 3 comments: 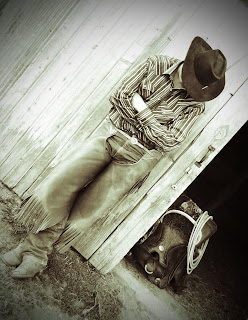 First, I must apologize for my absence on the blog yet again.  I'm afraid I'm starting to sound like a broken record.  You'd think I don't like to write with the time spent in between but nothing could be further from the truth.  I love to make words flow.  I love the feel of pen on paper.  I like to hear the sound of typing.  Just seems harder and harder to find the time.

The picture above is of my oldest son, Dustin.  He will be 18 right after Christmas this year.  It's with a mixture of pride and sadness that I say that.  I miss the days of him having to reach up to grab my hand but he is growing into a man I'm so proud to call my son.  He epitomizes everything that comes to mind when I hear the word cowboy.  He's hard working, honest, tough and gritty.  He stands up for what he believes in and can be stubborn to a fault.  He has a huge respect and genuine care for animals.  He tries hard to listen and learn from those who have been ranching longer but is also finding his voice to throw new idea's out.

He comes from a long line of people that work hard and joke around just as hard.  He didn't fall far from the tree on that one either!  He's not bashful about who and what he is and you can either like him or not, your choice.  It won't change him.  I love that there is no shame for him to hug me or tell me he loves me in front of his friends.

We have our disagreements, as families will, but he's quick to apologize if he needs to.  Just as quick to point out if it's me that does!  We were gathering cows the other day and I was telling him what he needed to do way more than any kid needs.  He waited, with more patience than I could have ever mustered myself, til we got to the corral to say, "Mom, when you look at me on this horse, do you still see a 7 year old boy?  Cause that's what you're treating me like."  He didn't say it snippy but very matter of fact and it was a reminder I needed.


Another year of the L & M Sheepdog Trial has come and gone.  We had handler's from all over on their way to the National Sheepdog Finals in Oregon.  We used our commercial ewes with May lambs and they proved to be a challenge but definitely workable.  Pens were tough to come by and the tiniest bit of wrong pressure was often the undoing of great runs.
Jean Gellings and Star won the Open overall belt buckle that Jay and Sue Nies of GE Associates in Martin, SD graciously donated. Don Helsley and Jessie won the Open Ranch overall jacket.  Don Helsley and Rene LaBree did a wonderful job of sorting out the runs!  Thanks to both of you!
Thanks to my husband, Mike, who worked the setout pen both days.  A HUGE thanks to our sons, Dustin and Brady who set sheep horseback all day both days.  They did a really great job!  My niece, Tashina, gave up her time both mornings to come scribe. My mom, Jean Hines, prepared a very nice handlers dinner for everyone Saturday night.  My dad, Bill Hines, played guitar and sang with everyone Saturday night as well.  Thanks to Jamie Spring for always being there and doing anything and everything.
I really appreciated all the help from handlers as well.  You all pitched in whenever someone was needed and I'm grateful!  Dennis Edwards, Dennis Gellings, Stormy Winters, Bud Boudreau, Barb Ross, Vergil Holland, Jon Lamson, Gary DiPaolo and Dave and Judy Parker.  Sure hope I didn't miss anyone but please know you're all appreciated!
Hope to see you all again next year!
Open 1 Results – 9-15-12

Posted by Laura Hicks at 6:24 PM No comments:

Things that make you go HMMM!

We're supposed to start lambing around the first of May. I remember exactly when I put rams out (Dec 5th) and even have it marked on my calendar. My rams live in a welded wire fenced lot during the "off season". There really is no escape and I'm sure I would notice any escape attempts since we feed them every day and they're literally right behind my house.

Tell all that to the 9 ewes that lambed a month earlier than planned. I have racked my brain (and rattled my families) trying to figure out what happened. I'm sure if the rams did get out they didn't let themselves back in magically without one of us knowing either.

Thankfully they seem to have stopped and will hopefully hold off until after we shear the rest of them now. So, was it immaculate conception or between the squares breeding? I doubt I'll ever know exactly what happened. To say that bugs me is an understatement! I guess I'll have to live with it though. I have begged the rams for info (even bribed with extra grain) but their not talking!
Posted by Laura Hicks at 3:08 PM 2 comments: 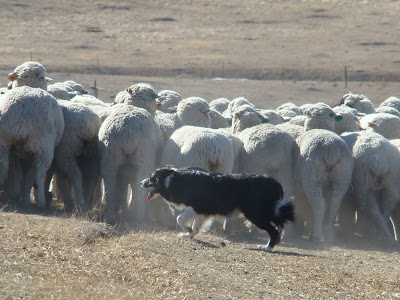 Rock
It is the middle of March now and we've had a very mild winter here. As you can tell in the pictures, we're really dry. Praying for a wet spring to come. 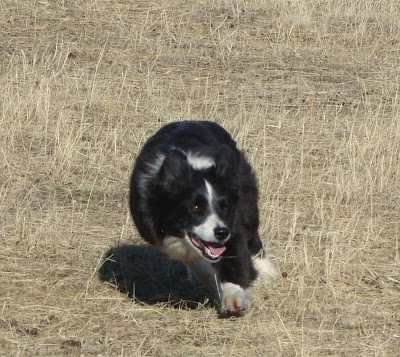 Jess
Mike, Dustin and Brady all went to help fight a fire last night and there's another one going again this morning. We're supposed to be in the 70's all week. Sure enjoy the warm weather but would love to have some moisture with it too. 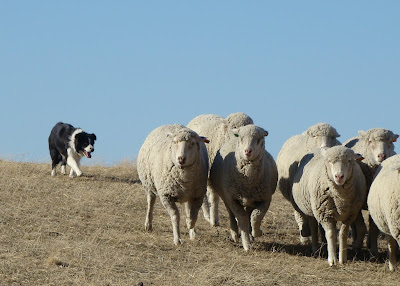 Teal
The ewes are starting to get fairly heavy already. We don't start lambing until the first of May. With this weather I wish we were doing it right now but you never know when old man winter might rear his head again! 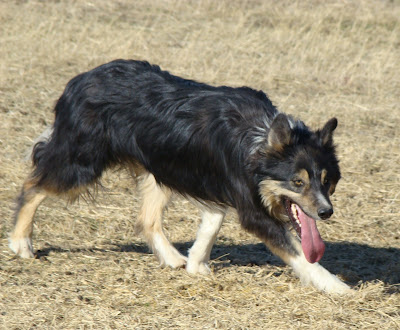 Ty
Sure am enjoying working my dogs on these beautiful days! All four of them are completely different from each other but also so willing and eager to learn that it makes figuring them out fun! 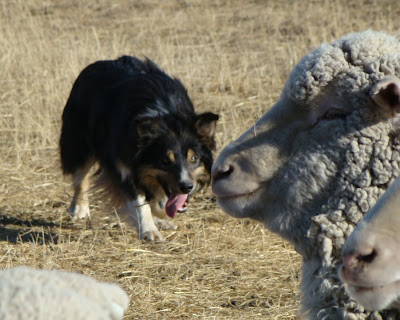 Ty
I'm planning on going to a few trials this summer if I can get away. I'm hoping to have both Jess and Ty ready to run in the nursery. Sometimes I know they're ready and other days they decide they don't have ears anymore! Hmm, kind of reminds me of my teenagers. :-)
Posted by Laura Hicks at 9:10 AM 4 comments: