Much ado about nothing!

We do have a new guard dog pup. We call her Sara and she is a Great Pyr/Akbash cross. She's only 2 1/2 months old so a long way from being helpful yet. She is a quick study though and seems to be picking up on how to read the sheep and fit in with them well. She'll be close to the house with some feeder lambs until she's old enough to be safe out with the big bunch. 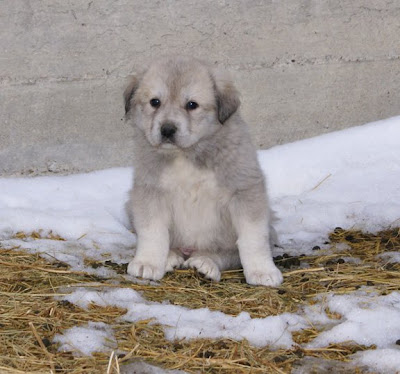 Brady's wrestling season is going much better this year. He's still an 8th grader wrestling a lot of junior's and senior's but he's beginning to hold his own again. Sure has been good for his confidence. He's wanting to play baseball again this year and his dad had consented since they'll be done when school gets out and it won't conflict with haying season. Oh yeah, more late nights!

Dustin is trying to rope as much as his free time will allow. Hopefully he'll be ready to compete by spring. Right now he has to hang out in town while his brother is at wrestling practice every night so they don't get home until late on the weeknights. He's been named sophormore server for the prom in April and he cracks me up over it! You'd think someone was threatening to kill that boy as big of a deal as he makes that he has to wear something nice that night! Way to much like his Dad. Good thing I love them both!!

You will seek me and find me when you seek me with all your heart. Jeremiah 29:13 (NIV)