Rock (Reece x Jag) turned 2 years old last week. I can't believe how fast the time has gone. I met him when he was 3 weeks old and tried so hard not to pick him. I wanted the one who looked like a mini Jag (Erin's Z now) but when I held Rock he looked straight in my eyes and I could feel him reach right into my heart! He's been there ever since. 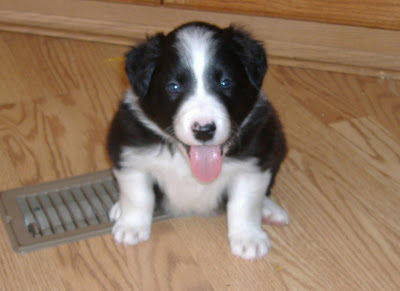 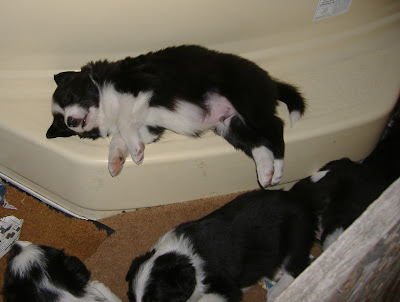 (Rock at 4 weeks in one of his rare calm moments)

He has grown up into a handsome boy with loads of talent. He still acts like a pup at times and still needs lots of miles of work to fully mature but he's got everything he needs to become a great dog. It doesn't hurt that he has to have one of the best personalities ever. He can be a bit of a spaz at times but it's just because he lives life at full throttle. There is never a dull moment with Rock around. My whole family adores this dog and we're hopeful for his future! 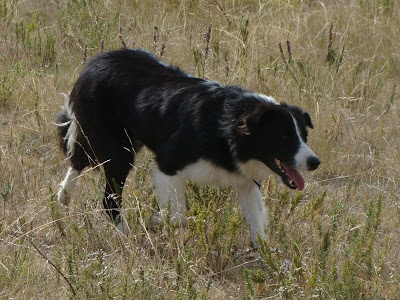 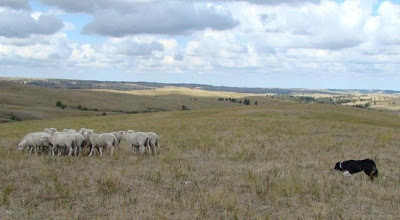 (Rock this past fall moving some ewes)

Here are a couple of pictures of Cash and I from the BHSS. Jan Swan Wood from the Tri State Livestock News took them and also did an article. She emailed these to me as well. The one where Cash I are together at the Y-chute just cracks me up. Cash's butt in the air is SO him!

These were taken in the prelim round so the crowd wasn't very big yet. They estimate about 3000 people there for the finals. What a great chance to promote the Border Collie to ranchers in our area. 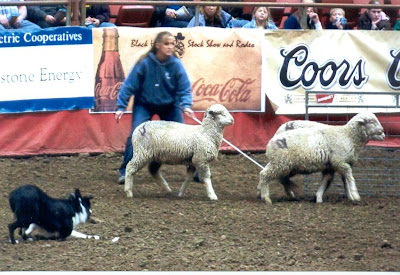 Dustin, Brady and I traveled to Gillette, WY for the Winter Western Stock Show on Friday, Feb. 12th. I ran Zac and Cash and Dustin ran Kat. Both of my dogs ran really well but just missed getting in the money.

Dustin on the other hand laid down a beautiful run in the PN and won it! It was a timed trial but Dustin and Kat's run proved that smooth is usually efficient as well. It was just one fluid move on a straight path. I was so proud of him. He's really stepped up as a handler this last year. He doesn't get to very many trials so it's hard to advance very fast when you're always busy helping your dad! We're both hopeful that he'll be ready to move up by summer or fall though.
Posted by Laura Hicks at 7:14 AM No comments:

Holy smokes, it was a long night in my house last night! Dustin and I have been taking turns taking Speck out for walks and it was my turn right before bed last night. Jag and Zac were out with us and out in front a little ways. I should have stayed closer to the house and under the dusk to dawn lights. Lesson learned!

We went down near the haying equipment and post pile to see if Speck would go quicker. Zac and Jag were dinking around and ended up in the post pile. The next thing I heard was Zac barking. I hollered at him but figured he was just barking at a cat as they like to hang out down there. NOPE. It was dark enough I couldn't tell what it was but saw it standing it's ground against Zac. He called off and came right to me and Jag came running by it. I looked back as I was walking away and it was following us. It was then that I smelled it!

I ran back up to the house and went to put Speck back in when Jag busted by me to get in the house. He ran up the stairs and I hollered for Dustin. He wasn't sure what was going on and neither he or Mike figured it out for a mintue or two as I was downstairs. Jag promptly rubbed all over the couch trying to get the spray off his face! Then he rubbed all over Dustin before he realized what was going on and finally ushered him out the door.

I went out and tried to at least clean their faces up a little so it wouldn't burn. They got to sleep outside though as I don't have enough tomato juice on hand right now to give them a bath. I'll pick up some today though and hopefully get the smell to die down a bit. Poor Zac is pretty upset about the idea of sleeping in the kennels though! Jag is the big issue though as he's been confined to the house because of an injury. Not sure what I'll do with him today as I don't want him out in a kennel all day but I REALLY don't want him in the house right now either.

If anyone has any good home remedies for getting rid of the skunk smell on dogs, please feel free to share them with me! I went through a whole can of febreeze trying to get the smell out of the house. Between that and the exhaust fan running with open windows for an hour last night it's at least liveable now! This does mean war now for the skunk and I though.
Posted by Laura Hicks at 7:41 AM 2 comments:

Winter is dragging on here. When, oh when, will there be some blue skies and warm weather? We have a couple of feeder calves that are normally up in a 5 acre lot but the fence is still under so much snow that we can't hold them in there. So, they have to stay in the corral for now. It's cause for a lot of long, slow days for them.
New and interesting toys are tried out to see what provides the best entertainment! 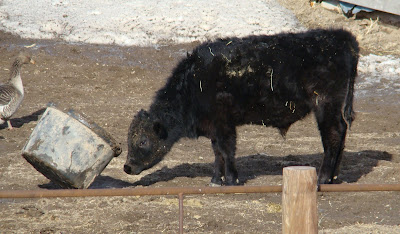 When it gets to miserable out it's always best to just cover your head until it gets better! 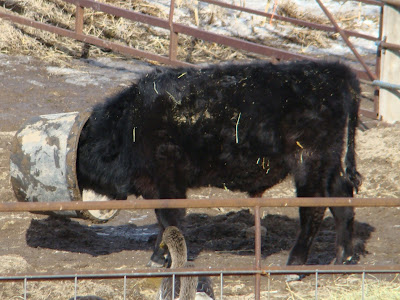 Posted by Laura Hicks at 1:50 PM No comments:

Okay, today is Speck's surgery day to fix the ruptured ACL. It's going to be a long spring for this young, exhuberant dog trying to be quiet and calm. It puts his training behind schedule as well but hopefully the time off will allow for more maturity. In turn, maybe he'll progress quickly once we get going again. I'm going to miss having him for all the cattle work these next several months as he's right up there with one of the best young dog's on cattle I've seen in awhile.

Think of all the quality time he will get to spend in rehab with Dustin and I though! Do you suppose he feels real fortunate? If you would keep him in your prayers today I know I'd feel very forunate. Thanks!!
Posted by Laura Hicks at 8:00 AM 3 comments:

Wow, if there was a cloud 10 I think I'd be on it right now! Cash, my young dog, won the Black Hills Stock Show dog trial. It was his first year to compete there (it's actually been just a year now since he first set foot on a trial field) and the crowds and noise didn't seem to phase him at all. I couldn't be happier with the boy! He handles his sheep well and penning with him is just about like using Zac already. 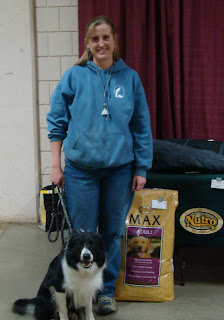 We actually had a really good day in Rapid City yesterday overall. Zac just missed the cutoff to make the top 16 by one place. He was 4 seconds slower than Cash. He held the 16th spot until the last dog and then got bumped out by my good friend Tim Naasz and his good female, Zoey. Tim was first with Ryn (Nell x Spot) and second with Zoey (Tim's breeding) in the preliminary round. Rene LaBree and Jazz, were 3rd in that round and Dennis Edwards and his good young dog, Craig (Nell x Lew) were 4th.
I also ran Nell to fill in for Jag who is still out with an injury. She did really well for not being to a trial in a long time. She was slower than she needed to be but got around the course and was still in the top half out of 60 dogs. Dustin ran Kat and it was a good learning experience for him. He got through the figure 8 handily but then got hung up at the Y-chute. He learned that it's pretty important to run your dog the way it works best for them and not try to run them like someone else runs their dogs. He has come so far as a handler and I couldn't be more proud of him. He handles loss with more dignity than some adults.
Dustin was also great about helping me stay focused and calm before my runs in the semi's and finals. He took the time to pray over Cash and I before each run and the whole time we were running as well. He is definetly a shining light in this world!
Here are results that I have recorded. I don't have the way we placed in the semi's but the cumulative times to get into the finals. I know Cash was the fast time in the semi finals and I believe Dennis Edwards and Nap were second. They pay fast two times in the prelim's and semi's. Then everyone in the finals.
Prelims:
1. Tim Naasz - Ryn
2. Tim Naasz - Zoey
3. Rene LaBree - Jazz
4. Dennis Edwards - Craig
5. Murray Ketteler - Jack
6. Jeff Garman - Matt
7. Alison Ramsbottom - Cap
8. Alison Ramsbottom - Rob
9. Joni Swanke - Sweep
10. Shannon Fritz - Ben
11. Gerald Bunney - Lou
12. Tim Flint - Lad
13. Dennis Edwards - Nap
14. Pete Carmichael - Liz
15. Joni Swanke - Griz
16. Laura and Cash
Combined time order to get into finals:
1. Murray Ketteler - Jack
2. Tim Flint - Lad
3. Laura and Cash
4. Shannon Fritz - Ben
5. Gerald Bunney - Lou
6. Dennis Edwards - Nap
Finals:
1. Laura and Cash (Yay for my boy!)
2. Murray and Jack
3. Dennis and Nap
4. Tim and Lad
5. Gerald and Lou
6. Shannon and Ben
Posted by Laura Hicks at 6:27 AM No comments: