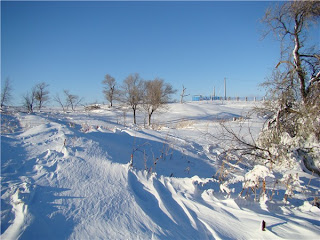 It's hard to tell in this picture but there are 5 1/2 foot tall fences buried in there. The rams were in that pen and the snow banks were hard enough to walk them across it and put them in a different lot. 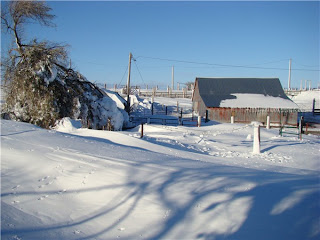 I'm standing on the snow bank taking this picture. That tree broke off onto the chicken house. The chicken house with all but one chicken it was completely buried. There wasn't anything but a bit of the roof showing. 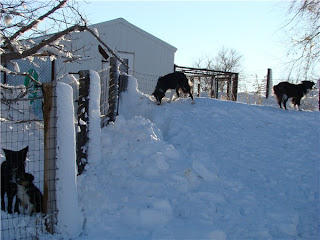 The dogs could walk across the fence in the high spot there and it's over 6 foot high. 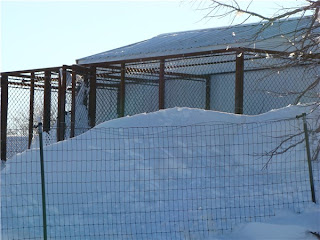 Once it settled down around here my boys had a blast digging a huge tunnel in this bank. They had a great time naming all the different "peaks", "mountain ranges" and "passes". 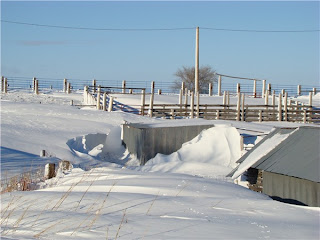 The barn towards the back is 14 foot tall at the back. The snow drift actually gets much higher to the left of the picture. That one went to almost 20 feet tall. The drift towards the front went into the building. To get in there I had to dig a little hole and then I could shimmy in on my stomach up against the ceiling. Thankfully the rams weren't in there. Just one stray chicken.

Well, the first weekend of November was almost summer like weather. Dustin and I spent it at a dog trial in t-shirts enjoying the 70 degree days. The second weekend was a totally different story.

It started to snow Wednesday afternoon (the 5th I believe) and we lost electricity by 3 pm. It snowed pretty good all night and woke up to close to 8 inches. Thursday the wind blew hard all day with gusts close to 80 mph. Add another 10-12 inches of snow coming with it all day and it made for a disastrous blizzard.

Not to be dramatic but everyone is pretty much in agreement that it's the worst one we've had here in at least 30 years. It's the worst one I can ever remember. The worst part was that it wasn't predicted to be even close to this bad so we didn't have time to put the sheep anywhere different. They were down in a good draw but after almost 2 days of the wind and snow blowing that hard, it blew them out of there and through the fences.

By the time we were able to see enough to get to them on Friday (we tried on Thursday but you literally couldn't see 2 feet in front of you) it was a horrid sight. The majority of the snow drifts were six feet tall but many were between 12 and 20 feet. The rams and feeder lambs had a barn but it had literally filled to the roof with snow in all but about a 2' x 10' area. Two of the feeder lambs had been trampled and died as a result.

We started finding the ewes scattered out all over the pasture. It was a pretty horrible sight honestly. It was hard to tell that they were even sheep. They looked more like snow drifts as they were SO covered in snow and ice. Mike started putting hay out for the ones that were fairly grouped up. Zac and I started gently easing the others up to the hay. We got a count and realized we were about 40 head short. So we went looking and found about 20 up against the fence in the pasture. There was a huge snow drift on the other side. Mike found a couple of air holes and we started digging. We found 20 head of ewes buried in there. It was amazing to me how many of those were still alive. It took us 4 hours to dig them all out but all but 6 of them survived. We never could find 4 of them and still don't have a clue as to where they might be but we're assuming they didn't make it. There are 3 that are still down that were buried in the snow bank but they seem to be getting stronger every day. Who is it that says sheep are weak? Ha!

We had just weaned calves about a week prior to the storm hitting. The snow buried a good portion of the fences around the country including the pasture our calves are in. We found all but 50 head on Friday. We found the remainder by Sunday. We lost 3 of them in the storm and we're dealing with a fair amount of sickness in them now. We had about 40 head of neighbor cows that had made it to our house on Friday so we finally got those all moved back to their rightful places on Tuesday. The boys and I have had our fill of riding in deep snow to last for awhile!

We still don't have electricity and they're telling us that it might be Thanksgiving before we have it. There are over 1000 poles down in our local area. The National Guard is in here now helping the Electric Company get through the snow and now mud to get to the poles. So, it looks like there may be light at the end of the tunnel!

We are very blessed and things like this have a way of reminding us of that. We know how much worse it could have been for our livestock. We know how many other people around the area only have electrical heat and have had to leave their homes until the power comes back. We know that all of our family and friends stayed in during the storm and weren't stranded in vehicles all over the state. We are so thankful for a great generator that we can run some of the household appliances on from time to time. Most of all we're so grateful to live in a "community" that all works together to help each other out whenever it's needed!
Posted by Laura Hicks at 8:05 AM 5 comments:

Well, the bunch of cows that we just weaned calves off of got moved out of the corrals today and to a new pasture. We didn't have any extra rider's come over today. It was Mike, Dustin, Brady, myself, Jag and Kat. Dustin hasn't taken Kat with us to move cattle very often lately. I forgot how nice she is for that kind of work! She has so much stamina and just does her job without a lot of commands needed. I think Dustin decided moving cows with her might even be better than trialing. We decided that we (people) were basically there to open/close gates and get the dogs started in the right direction with the bunch. Other than that we just rode along and visited. I love having neighbors over to help us but I can't help but think how much simpler it is with the dogs to do the work instead. They don't drink as much beer either!
Posted by Laura Hicks at 5:22 PM No comments: